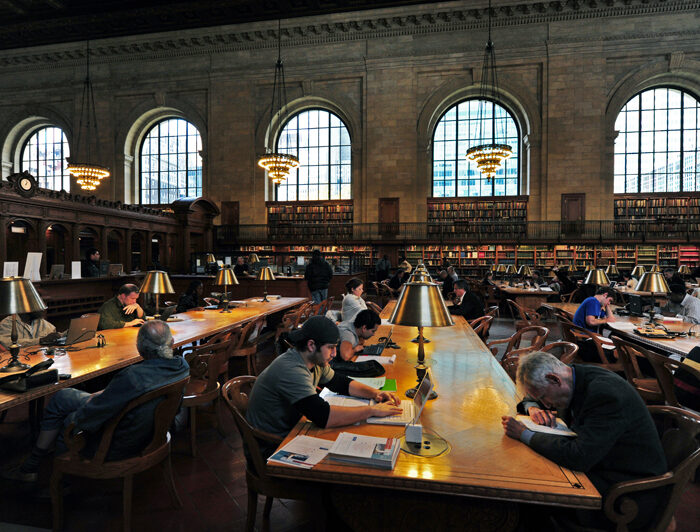 Our intrepid heroes visit the New York Public Library to meet up with visiting literary scholar Merrill Malone, an eccentric and the foremost expert on Virginia Gaskell’s life and work, to get, once and for all, all the answers about the portals. What they don’t realize is that shocking personal revelations and the very ground beneath their feet will alter forever within the library’s seemingly pristine walls. (Running time: 55 minutes, 43 seconds.)

Sound design, editing, engineering, and mastering by a bald man in Brooklyn who clearly has some corporate identity issues to work out.

Here are some behind-the-scenes photos and videos pertaining to this episode that we made during the more than two years of production we put into the second season.

This script has gone epic and requires keen focus. So I have shifted venues from cafes to the Rose Reading Room, the only piece of architecture in New York that demands that you produce or leave the long table. Nobody has to say anything. The architecture speaks for itself. Produce or leave. I am writing. #writing #nypl #rosereadingroom

This morning, I recorded with the incredible @theblondebraveheart, who you may remember as Jenna in "Compassion Fatigue." I'll say nothing about what happens, but, as you can see, we do revisit an incident involving an Elizabeth Hardwick book. Fortunately, I had all of Hardwick's volumes on my bookshelves to help zero in on the motivation. I can't say enough great things about Devony's talent and commitment. It was @tim_torre who sent her my way in the first season and I will be forever indebted to him not only his performance in "Hello" but for this terrific referral, which was a tremendous act of generosity for this production. Devony and I carried on as if two weeks had passed rather than two years. I also cast her as another character because she had expressed interest in playing someone of that type. But as Jenna, Devony came prepared and energetic: someone who I can totally trust to give me just as many ideas as I suggest to her. She was such a joy to work with that I really couldn't settle for a performance that didn't contain a few nuances here and there, even on lines that most other people would be happy with. We conjured up a quick backstory entirely based on Devony's instincts as a performer and where she wanted to take the character. And it all happened far faster than either of us expected. One other fun detail: Devony is the third actor in a row who has showed up wearing power boots. Apparently, the women I conjure up are so punk rock that this sartorial detail, arrived at independently by all three, has become a subconscious style choice. And it is one that I consider a great compliment! Anyway, the turn that Jenna takes in the second season will surprise you, if only because Devony very much surprised me! Thank you so much, Devony! #audiodrama #acting #character #surprise #fun #elizabethhardwick #boots #punkrock

1:30 am. Nolita. I was restless. I HAD to get this out of me. So I holed up in a bar and whaddya know? I finished a 150 page draft of the season finale. It will definitely need a rewrite, but you're NOT going to see this crazy ending coming! Certainly it surprised the hell out of me. Thus ends the very labor-intensive and time-consuming "creating stories out of nothing" stage of Season 2. I'm a little delirious right now, but quite happy to begin the revisions over the weekend! Once I get this script in shape, we record the rest. And I can finally devote myself full-time to editing and releasing. Many thanks to my incredible cast for their faith and patience! This is going to be fun and weird! #writing #audiodrama #latenight #creative #script #nolita #fun #weird

This morning, I had the great pleasure of working with @lilminda, who plays an uprooted server who works at a chicken diner in Wyoming who you don't want to mess with! Amanda was a joy to work with! She is SO good in this part and I could tell that she did serious prep before coming in. Because she really got the way that this character tries to see the best in people, even when they are being difficult. The only recurring note I had to give her was "More grrrr." Thank you so much, Amanda! This was so much fun! #recording #acting #character #wyoming #women #grrrr #chicken #diner #fun #yay

This morning, I had a super fun recording session with @devonydimattia, who is always a joy to work with! In this scene, her character (Jenna from "Compassion Fatigue") is dealing with an eccentric professor. Two pages in, Devony had the character down. Five pages in, we were coming up with so many layers that I really felt we had exceeded what was there on the page. Also, the funniest part of today was that I actually got a better performance out of Devony when I read the lines in the voice of Ricardo Montalban from STAR TREK II: THE WRATH OF KHAN, proving that impersonating Khan is strangely useful in the production of audio drama. Thank you so much, Devony, for once again being so marvelous! #audiodrama #character #acting #act #recording #startrek #khan #professor #library #character #voiceover #performance

I had a very fun time this afternoon recording some season finale stuff with @katrinaclairvoyant and @devonydimattia! These two are always a blast to work with! What's great about these dual actor sessions is the way you discover details about characters by the way they bounce off each other. For today, I definitely needed that social energy. Because there are a lot of people in this scene! In this case, both Devony and Katrina found opportunities to inject some unexpected humor into these characters. I also noticed that both characters started mimicking their respective tics, almost sizing each other up, but said little (although I did laugh a lot), letting the two figure it out on their own and planting little seeds for why they might be feeling a certain way. You always want to guide actors gently, giving them just enough to imagine so that they can always surprise you. And these two certainly did! #acting #audiodrama #voiceover #collective #recording #drama #theatre #character #roles #humor #dimension #guide #seeds #imagination

Production doesn't stop around here! Not only did @glassmanegerie and I have boatloads of fun unpacking the Receptionist's dormant love of 90s Britpop, but Zack inspired me to improvise a Meisner-based hip-hop approach to help him on a line that not only worked, but that I'm now adding to my directing toolbox! #audiodrama #production #hiphop #meisner #directing #britpop #pulp #commonpeople #music #theatre #acting #direction #performance #character #recording #actors #drama

I had a blast this morning with the incredible @robgarson, who came seemingly out of nowhere and perfectly encapsulated the role of an eccentric professor who has big clues about the Virginia Gaskell mystery. In addition to being a very smart and hilariously energetic man, Rob is also a fine mimic of many UK dialects. He was incredibly easy and very fun to work with and this was one of those sessions where we both fed each other little nuances about the character, who I wanted to be somewhat stylized but nevertheless real. This is actually the other side of the scene clip I put up with @devonydimattia a few weeks ago. And this very goofy scene is truly going to be a lot of fun when I stitch this all together. Thank you so much Rob! #audiodrama #acting #recording #voiceover #character #british #professor #actors #session #fun #mimic #drama #background