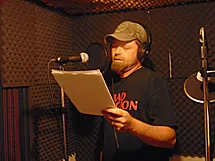 The Knight in Several Universes

Stoic, inquisitive, and almost always donning an old ball cap and a pair of headphones for intense production binges, the fearless leader and founder of Audioblivious Productions…Austin Beach. One night a few years back, Austin was surfing the Internet and, while trying to discern the finer points of what one could only describe as “breeding techniques utilized by third world goat herding villages and their not so common aphrodisiacs” (don’t judge people, it’s called research), he heard a noise. Afraid of being caught…researching…by his beautiful wife or lovely daughters, Austin immediately typed in random letters into his search engine, jetting him off to safety. This day, the weavers of fate had things in store for Austin as he landed on a page consisting of…hmmm… what’s this? Audio drama… and like an addict’s first shot of heroin, all it took was one click and he was hooked. A true audio drama junkie. A man of boundless creativity, Austin saw an opportunity for a creative outlet he hadn’t seen since his days as an aspiring comic book artist, and he knew just the guys to bring in for the job. Bringing them together to spitball the idea of audio drama at a local greasy spoon, he talked at great length about the loose, fast, and exotic lifestyle of the “audio dramatist” and that we needed to be a part of this world. Threatening his lifelong friends with blackmail, they reluctantly accepted, and today find themselves… um… happy and subservient members of Audioblivious Productions.

On a serious note, Austin is hard working and dedicated to constantly improving his craft. A writer, director, sound designer, audio engineer, and not to mention a voice actor (not just for Audioblivious, but in many other productions as well) Austin feels as if he has truly found where he belongs.