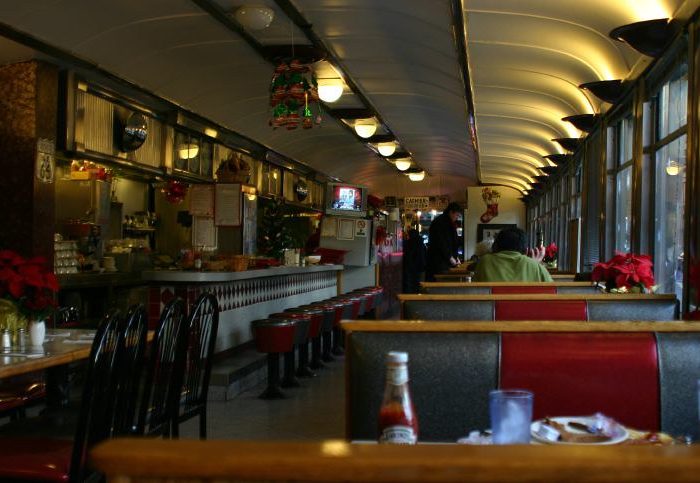 In a Wyoming chicken diner, two mysterious strangers make trouble with the locals over a philosophical matter. But their professed tolerance is put to the test by a remarkable failure in judgment that involves animal rights, bicoastal elitism, and a great deal of swagger. (Running time: 22 minutes, 2 seconds.)

Sound design, editing, engineering, and mastering by a bald man in Brooklyn who sometimes writes haiku about ducks on Thursdays.

Today I had the great privilege to record with the fabulous @nppapadop. Nicole paid very close attention to this character. In fact, an hour before Nicole showed up, I noticed a minor story logic problem and was forced to swiftly revise the script to solve it! When Nicole and I did the preliminaries, sure enough, Nicole spotted the very same issue. So I already knew this was going to go well. There were many times when I was about to give a note and Nicole suggested the note before I could say it. As a result, the session was very fun and smooth. Nicole also really found the humanity in this very unusual character and, for that, I am both tremendously grateful to her and very excited about this story! #acting #voiceover #audiodrama #fun #emotion #yes

Today I had the great pleasure of recording with the wonderful @lilminda. Amanda plays a tough and colorful waitress at a chicken restaurant who becomes a big part of the story. Amanda herself possesses an endearing combination of resilience and warmth, along with a beautifully distinct voice. I liked her instantly when I first met her and I knew she was perfect for the role. One thing we did to get a sense of place (so that the story feels both big and real) was to have Amanda use a few improvised props while we recorded. When I gave her my coffee pot (alas, it had not been washed!) to use while recording her lines, she started hitting the emotional peaks in her dialogue and her character really started growing. There was a particular line in the script that Amanda hit and played with relish. And we both agreed that this summed up her character. You build characters by accretion and paying close attention to the instincts an actor brings. You listen for moments in the table read. You observe certain tics in the performing. Amanda made this very easy and we had a lot of fun. I'm thrilled that she's part of The Gray Area and can't wait for you to hear this story! #recording #audiodrama #acting #props #character #chicken #coffee

Today, I recorded with the dreamy @the_edboi. In my experience, fellow Eds are typically a great pleasure to meet. And Ed was no exception! I loved working with him! Ed absolutely gets this silliness! Ed has great instincts as an actor, bringing little tics that I started sprinkling in other places and a wonderful energy to this very fun character, who is a bit of a cowboy and a bit of a clueless Jack Burton type, but who Ed smartly pegged as "lawful good." In fact, I wasn't even aware how indebted I was to #johncarpenter until I asked, while giving a note, "Have you seen BIG TROUBLE IN LITTLE CHINA?" Upon being asked this question, Ed's eyes widened and he became super excited and we were quoting bits of the movie to get the slightly Western feel right on this tale, which is really turning out to be wildly entertaining and sui generis! #acting #audiodrama #recording #character #bigtroubleinlittlechina #jackburton

This morning, I had a lot of fun doing enhanced background work with Sam Mercer! He was so dedicated to this that he was willing to trek out here from Jersey City! In other words, Sam is precisely the kind of actor you want on your production. Now I am not one of those guys who just has background people saying "sarsparilla." All characters matter. Everything is carefully scripted but, of course, subject to improvisation. And thankfully Sam got this and injected his characters with some very funny spins. When you're creating a world, you want to have people who are willing to find human moments in everything. No character is too small. Having said that, this session was over far sooner than I wanted to be! And now I'm going to have to find some places for Sam in Season 3! I am greatly indebted to Sam for his passion and commitment. Thank you, Sam! #recording #audiodrama #character #background #worldbuilding #human $fun #acting #voiceover